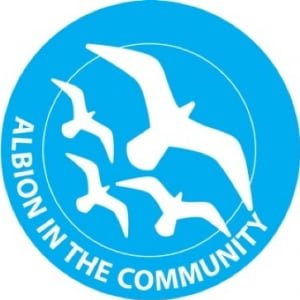 Brighton & Hove Albion are sitting at the top of the championship, expectation around the city is cautiously positive. The Seagulls have knocked on the door of promotion (through the play off’s) three times in the last five years. Last year success seemed finally on the way, yet more heartache. This season confidence is high and expectation is quietly up beat. Now was the time to reflect on how far this club had come in the last few years from being almost completely finished as a football team, with no ground and nearly bankrupt to arriving in a new Amex Premiership style stadium awaiting more glory.

‘The Goldstone Days – 20 Years On’ was a special show written and presented by sports reporters Peter Brackley and Garry Richardson in the Theatre Royal Brighton. It marked the 20th anniversary since the Seagulls left the Goldstone Ground, with a night of “memories and mirth!” (above Photo’s copyright of Simon Dack)

Forty minutes before the show started, a coach drew up outside the theatre, past players, directors streamed out making their way to the dressing room, some needing more help than in their playing days, but still being bothered by one or two fans for their autograph. Something they probably miss. All were delighted to be seeing one another again, with the hugs and stories soon starting. The supporters had turned out in mass to fill the 1000 seated theatre, to greet and say thanks to these past local hero’s, with a desire only the true football fan can supply.

The show was introduced by Garry Richardson only to be interrupted by the wise cracking Peter Brackley in character of a caretaker who had certainly completed his research on players and club, supplying a number of well targeted, hilarious one-liners on past team members, which continued throughout the evening.

Landmark events in the club’s recent history were celebrated with humour and insight by those who once played and directors who saved the club from almost extinction were called upon sitting in their customary box to participate with stories of how the survival took place. Former chairman (1997-2009) Dick Knight spoke passionately about the rebuilding of the club. All this in a two-hour theatre spectacular, which further featured action clips, comedy sketches and interviews with Albion names from down the years, either live on stage or on film.

Des Lynam former BBC ‘Grandstand’ (1979-91) & ‘Match of the day’ (1988-99) presenter spoke on film of his passion for the club and how it had developed over the years from coming to Brighton as a young BBC radio journalist in the sixties.

Past pin up hero Peter Ward was beamed in by satellite to speak to the audience on screen with a lovely Florida beach behind him, fans knowing he had emigrated to the U.S. Only to be interrupted in front of the camera by the caretaker face of Brackley, who by doing so got a big laugh in giving the game away Ward was next door in the green room, shortly joining his colleagues on stage.

The players were introduced to the audience, sitting on chairs reminiscent of a staging for ‘This is Your Life’ with the surprised guest being the club itself. Former manager Alan Mullery, Gary Williams, George Parris, Gerry Ryan, Teddy Maybank, Paul Clark, Garry Nelson and Brian Horton as well as three members from Brighton’s FA Cup final team 1983 Graham Moseley, Chris Ramsey and Gordon Smith were among the guest players.

Smith coming in for much banter about his last-minute miss in the final against Manchester United which would have won Brighton the cup. All good laughs but hasn’t the poor man suffered enough, a lovely guy who now lives and works in Glasgow.

The show was staged in conjunction with the club and in aid of Albion in the Community (AITC). Steve Darby organised the evening with former Seagulls player Guy Butters now working for AITC, who was busy on the phone ringing past players and officials from all around the world.

Some of the audience were more comfortable sitting in the North stand, than in the stalls of a historical Victorian theatre, this being marked by constant trips to the confectionary stall throughout the show, loud talking amongst themselves, occasionally being hushed by excellent host and compere Garry Richardson, who kept players in order and the show moving at a pace.

But all this gave a new fresh approach to the entertainment in what turned out to be a superb night for supporters and club. Peter Brackley said ‘I can tell you that the enthusiastic response from the fans was certainly felt by all of us up on the stage’.