Hire
Mike Osman
For Your Event

Former star of ITV’s impressionist series ‘Copycats’ – Mike Osman. Superb comedian and after dinner speaker, with Mike’s amazing range of impressions, you never know who is going to be on the guest list.

Mike Osman is one of the most respected performers in Britain today; and yet, for many years it was a part time indulgence as he built his reputation on the Capital Gold Breakfast Show. Building his audience to a staggering 1,700,000 listeners. In that time he achieved three New York World Radio Awards, the Promax Gold Award and the CRCA Newcomer Award; and numerous sell-out concert tours.

But now he’s back full-time on the circuit as the former star of ITV’s Copycats; concentrates purely on his immense cabaret skills as a Comedy Impressionist (Maybe the best in Britain?).

His likeable, warm personality comes over brilliantly on stage and he is much beloved by young and old alike. Mike is a brilliant impressionist and a hugely witty, original and talented performer.

Mike is very much in demand by various companies both in the UK and abroad and as a lover of sport (Mike is a keen Southampton FC fan) He is also involved in many sporting and media events.

Some reviews of
Mike Osman

Would you like to hire
Mike Osman
for an event? 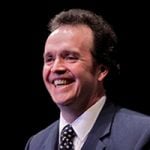